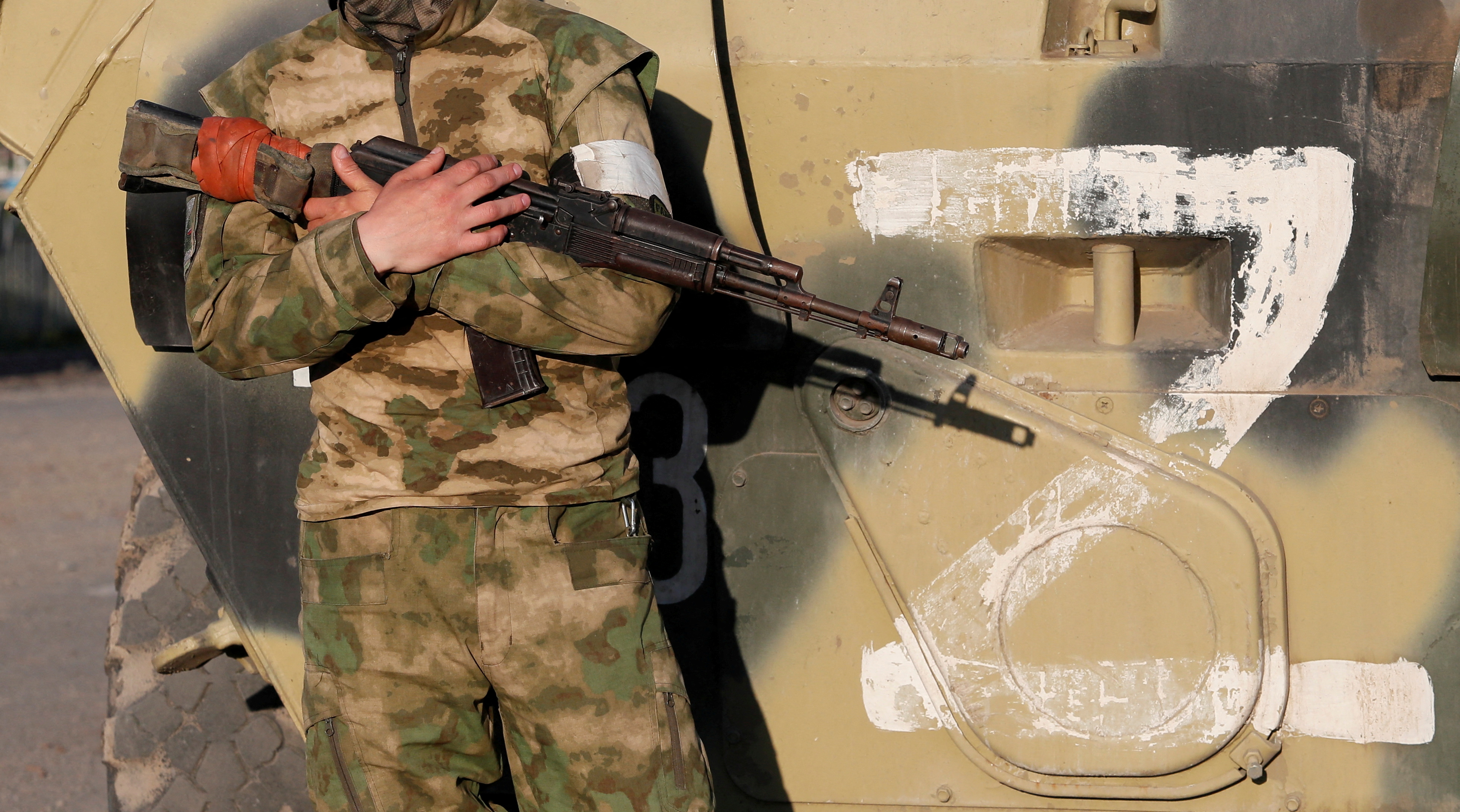 A member of the Russian forces in the port of Mariupol next to a transport vehicle marked “Z” used as identification by the occupying forces. REUTERS/Alexander Ermochenko

The Russian Federation has 768,000 soldiers in its active forces and another 1,578,573 in the reserves. It is the fifth largest army on the planet. Despite this, he is having trouble replacing tired soldiers after nearly three months of war in Ukraine. And he is resorting to what is known in military jargon as “the army of grandfathers”, the oldest reservists. They are the ones who left active service more than ten years ago. And more are over the average age of 45 that is considered the limit for the soldiers who are in action in the front, beyond the high officers.

Also they are forcibly recruiting among Ukrainians from the occupied villages of southern and eastern Ukraine. They are based on “laws” of the enclaves that have been in the hands of pro-Russian forces since 2014. Two weeks before the February 24 invasion, the pro-Russian leader of the self-styled Donetsk People’s Republic, Denis Pushilin, ordered a “general mobilization” of men to fight against the Ukrainian military forces. Many young people went into hiding or fled to the West, but now they are being “hunted” by the occupants. “The mobilization is everywhere, at bus stops, supermarkets, markets… cars are stopped and the military takes the driver to serve in the Russian army”, told Mari, a resident of Mariupol, on Telegram.

The Russian Defense Ministry reported on Sunday that Moscow was trying to “reinforce the number of troops with personnel discharged from military service since 2012″. In the invasion, he used approximately 80% of his total available, trained and combat-experienced ground force of 150,000 personnel. Thousands of messages from men complaining about having received a notification to report to their barracks as soon as possible appeared in chats and social networks in the last few hours. “I am 44 years old, I stopped being a soldier in 2012, I cannot leave my wife and children, my career. I haven’t trained for 9 years. What do they want me for? Dimitri wrote in a military chat quoted by the Kyiv Independent. 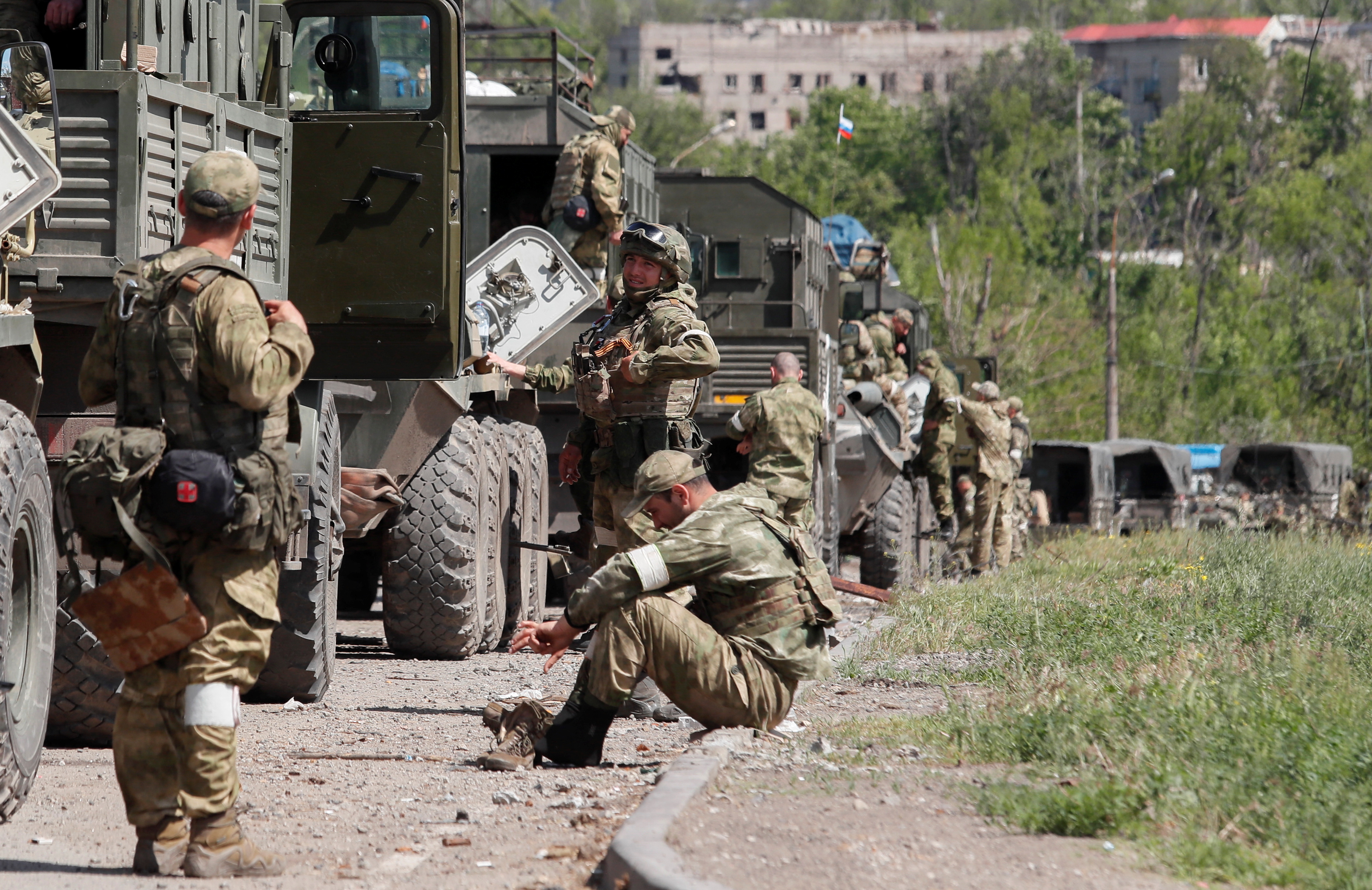 A convoy of Russian troops awaits the order to enter the Azovstal steelworks combat zone in the port of Mariupol. REUTERS/Alexander Ermochenko

Widespread mobilization is also known in Transnistria, the occupied territory of Moldova, with a population of barely half a million. There is a permanent Russian military base of about 2,500 soldiersbut it hosts an arsenal of 40,000 tons of ammunition, remnants of Soviet times. There have already been several mobilizations there and there are about 15,000 reservists from the war of the 1990s, most of them close to 50 years old.

There are no official figures, but most military analysts believe that Russia lost in these three months about 28,000 soldiers, almost a third of all the forces that invaded Ukraine. Dmitry Peskov, the Kremlin’s main spokesman, admitted that the army had suffered “significant losses”, calling them “tragedy for us”.

In its analysis on Monday, the Institute for the Study of War (IWS) said that the growing number of Russian casualties means that it will have a hard time forcing a victory in the Donbas region. “Russia is likely to continue to launch heavily damaged and partially reconstituted units in piecemeal fashion in offensive operations that achieve limited gains at great cost,” speculum.

What is being seen on the ground is a withdrawal of the occupants from the area surrounding the city of Kharkiv to concentrate in Donbas. On Sunday, the Maxar satellite company released images showing a 12-kilometre convoy of Russian armored vehicles and artillery heading south. And another video posted on Twitter showed a unit of Ukrainian soldiers reaching the Russian border, clearly showing the withdrawal from an area that had been in Russian hands since February. This reduces the center of operations to a much more restricted area with respect to the ambitions that the Kremlin forces had when they started the invasion. 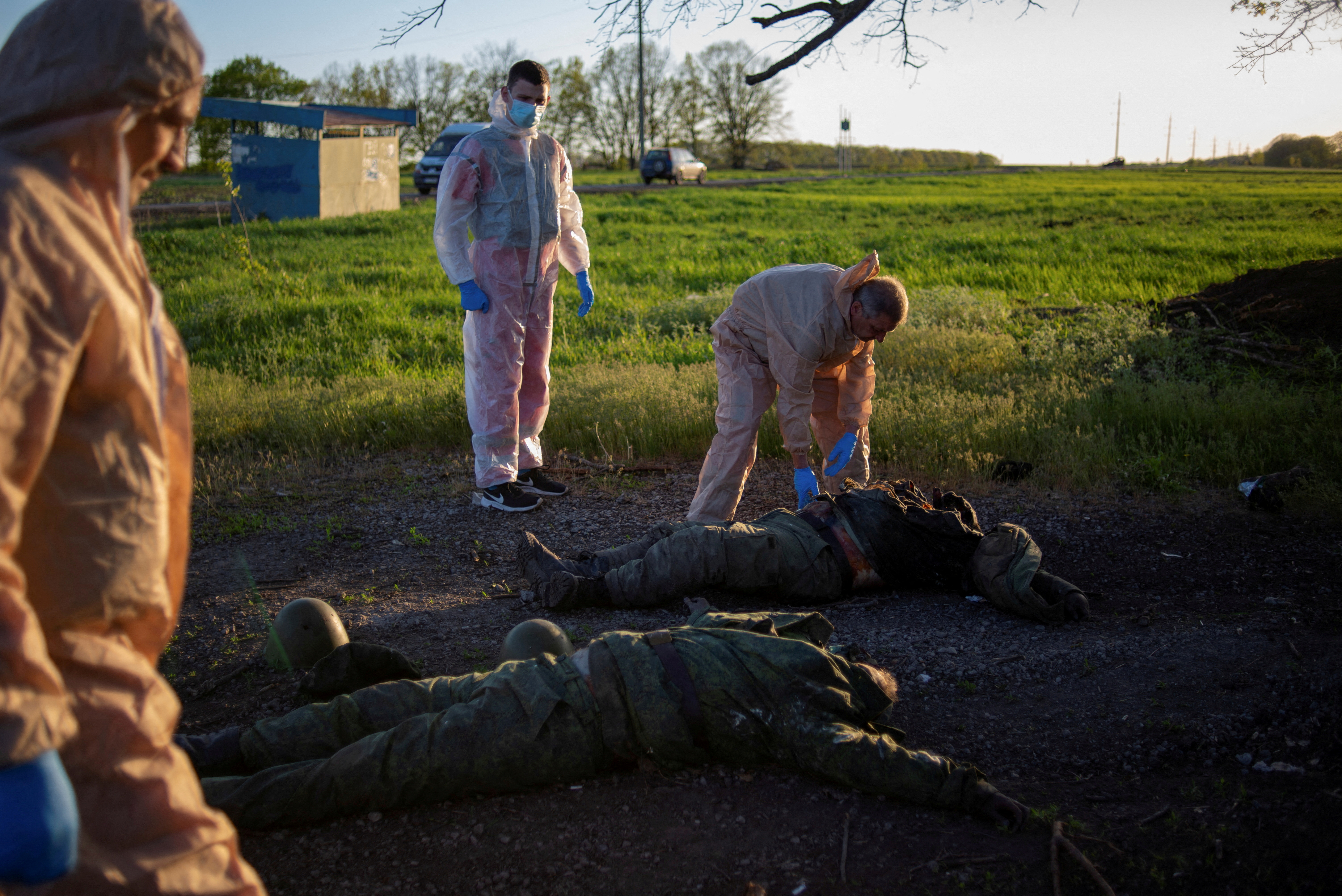 A group of volunteers collect the bodies of Russian soldiers in the village of Vilkhivka, in the Kharkiv region, reconquered by the Ukrainian forces. REUTERS/Julia Kochetova

The Russian army’s recruitment problems began with the withdrawal of the north around Kyiv after the failure to take the Ukrainian capital. When soldiers from an elite Russian army brigade were told in early April to prepare for a second deployment to Ukraine, there was a general desertion. The unit, stationed in the peacetime Russian Far East, first entered Ukrainian territory from Belarus in late February, engaged in heavy fighting with Ukrainian forces and sustained heavy casualties. “It soon became clear that not everyone agreed. A lot of us just didn’t want to go back.” Dmitri, a member of the unit who asked not to be identified by his real name, was quoted by The Guardian newspaper as saying. “I want to go back to my family, and not in a coffin.” Along with eight other commandos, Dimitri told his commanders that he refused to rejoin the invasion. “They were furious. But in the end they calmed down because there wasn’t much they could do,” he explained.

He was transferred to Belgorod, a Russian city near the Ukrainian border, where he has been stationed ever since. “I served for five years in the army. My contract ends in June. I’ll do the time I have left and then I’ll be gone.” said. “I have nothing to be ashamed of. We’re not officially in a state of war, so they can’t force me to go.”

Dmitri’s situation is similar to that of tens of thousands of soldiers who participated in the first Ukrainian campaign and shows the difficulties the Army is facing as a result of the Kremlin’s political decision not to formally declare war on Ukraine. Vladimir Putin describes the invasion as a “special military operation” and it is forbidden in the media to talk about “war”.

According to Mikhail Benyash, a Moscow lawyer who advises the military on signing their contracts who spoke to The Economist, according to Russian military regulations, troops who refuse to fight in Ukraine can be fired, but cannot be prosecuted. Benyash assured that in the last days she received in her study “hundreds and hundreds” from calls from soldiers who were discharged for refusing to return to Ukraine and from many others who do not want to renew their contracts. And he clarified that it would be more difficult for soldiers to refuse to fight if Russia declared a full-scale war. “In times of war, the rules are totally different. In that case, refusing would mean much harsher penalties. They would face prison sentences.”said. “Commanders try to threaten their soldiers with jail time if they disagree, but we tell soldiers they can just say no,” Benyash said. “There are no legal grounds to start a criminal case if a soldier refuses to fight while on Russian territory.” He added that he was not aware of any serious criminal cases against soldiers who refused to fight. Sergey Bokov, a 23-year-old soldier who decided to leave the army at the end of April after fighting in Ukraine, spoke to the BBC’s Russian service: “Our commanders did not even argue with us because we were not the first to leave”said.

Military analyst Rob Lee of King’s College London said “Putin has to make a decision on mobilization in the coming weeks. Russia lacks enough ground units with contract soldiers for sustainable rotation. Troops running low – they won’t be able to sustain this for a long period”. Lee believes that one option for the Kremlin would be to authorize the deployment of conscript units that are doing military service, despite Putin’s earlier promises that Russia would not use any conscripts in the war. “The recruits could fill some of the gaps, but they will be poorly trained. Many of the units that are supposed to train the recruits are fighting themselvesLee wrote.

Members of the pro-Russian Donetsk forces deployed in Mariupol. Many of these soldiers refuse to sign a new contract with the Russian army. REUTERS/Alexander Ermochenko

The Russian Defense Ministry is offering special contracts of about 3,000 dollars a month to people without combat experience without specifying whether or not they will have to go to fight in Ukraine. They also contacted the directors of some large state-owned companies so that they persuade personnel to join the army “in this very special circumstance”. And, of course, there are the mercenaries of the Wagner paramilitary group, which has provided the Kremlin with special forces for years. But military strategists believe that none of these options could solve the problem. The new recruits would need months of training before going to the front and the mercenaries do not constitute a significant number to turn the equation.

A general mobilization too could bring political problems to the Kremlin. Andrei Kolesnikov, a researcher at the Carnegie Endowment in Moscow, commented that “Although 60 or 70% of Russians say they support the invasion, it would not be the same if they start recruiting their children or if they start showing the arrival of coffins with soldiers killed in combat.” This is a scenario that Vladimir Putin wants to avoid at all costs. With this in mind, in the coming days it will have to opt for a considerable reduction of its ambitions in Ukraine with a concentration of forces only in Donbas and the southern corridor that connects the Crimean peninsula by land (10/15% of Ukrainian territory) or risk calling for a general mobilization to arm an army of 18-year-old “guy” conscripts and “old” reservists who almost forgot how to load a gun.

She went to withdraw 20 dollars from an ATM, but what she found horrified her

Russia-Ukraine War, live: Mariupol falls into Russian hands after the departure of the Azovstal defenders

“Ferran Torres is a spectacular signing”