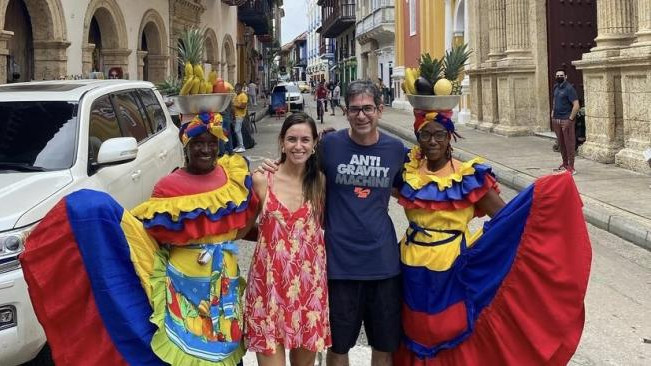 Marcelo Pecci was married to the Paraguayan journalist Claudia Aguilera. The couple was in Colombia spending their honeymoon and celebrating the birth of their son. PHOTO: Instagram: @aguileraclaudi

Claudia Aguilera, widow of prosecutor Marcelo Pecci assassinated on Barú Island last Tuesday, is already in Asunción (Paraguay). On her return to her native country, Aguilera asked for respect for the privacy of her family after the murder of her husband. The couple was in Colombia spending their honeymoon and celebrating the future birth of their son.

Aguilera is a renowned Paraguayan journalist who married prosecutor Pecci on April 30. Both would have arrived on May 5 in Cartagena. The woman was present at the moment in which the hitman ended her husband’s lifeafter giving him three shots with a firearm.

In a public letter, Aguilera assures that the death of the anti-drug prosecutor is a great blow to his family and to all of Paraguay. “My family and I are immersed in deep pain for the murder of my husband Marcelo Pecci and his irreparable loss. The mourning is not only for their relatives and relatives, but for the entire country and the international community”, the communication begins.

You may be interested in: The story of the Colombian drug trafficker arrested in Paraguay that the authorities are investigating for the murder of prosecutor Pecci

Likewise, the Paraguayan journalist assured that: “These last days have been difficult to overcome, so I ask for respect for my privacy to be able to cope with the mourning and I also request respect for my relatives, without failing to thank my colleagues and colleagues for the empathy that they manifested to me”.

As it has been known, Aguilera would have identified the man who shot her husband before traveling to Paraguay. The suspect would be the same one that was recorded in the security cameras of the scene and whose spoken portrait was revealed by the National Police and who is being tracked to find his whereabouts. According to police information, he is a 1.74 meter tall man with a Caribbean accent. On her return to Paraguay, the prosecutor’s wife revealed to journalist Óscar Lovera details of the murder that shocked the entire region. In her narration, Aguilera specified that the people around her tried to help her at all times. In relation to this point, Aguilera reiterated that: “I will not give statements to the press. However, I will continue to collaborate with the national and international authorities throughout the investigation process, with whom I also feel grateful”, continuous.

Finally, she sent a message of admiration to her dead husband: “I appreciate your expressions of affection and support both with me and with the baby I am expecting. May the death of the respected and admired Marcelo Daniel Pecci Albertini find justice and strengthen the fight against organized crime. As far as I am concerned, I will honor the memory of my beloved husband every day for the rest of my life and I will raise an excellent human being and citizen as his father was”, finished.

For now, the investigations continue to find those responsible for the murder of the judicial officer. The Colombian Police works jointly with the Paraguayan and with US agencies such as the DEA and the FBI and consider as a first hypothesis that Pecci was murdered because of his functions as a prosecutor.

For her part, the Paraguayan ambassador to Colombia reported that: “We got a flight from Cartagena to Paraguay, with a stopover in Panama, which leaves tomorrow, Friday, at approximately three in the afternoon, and arrives in Paraguay at four in the morning on Saturday.”.

Supreme Court of Justice calls to declare Clíver Alcalá in the process of Piedad Córdoba for his alleged links with the FARC
David Manotas: the story of the murderer who stabbed and threw a neighbor from the balcony who complained about the loud sound of the music
Previous Post

The best memes that left Friday the 13th