Attack on the Capitol: Joe Biden drops his blows against Donald Trump 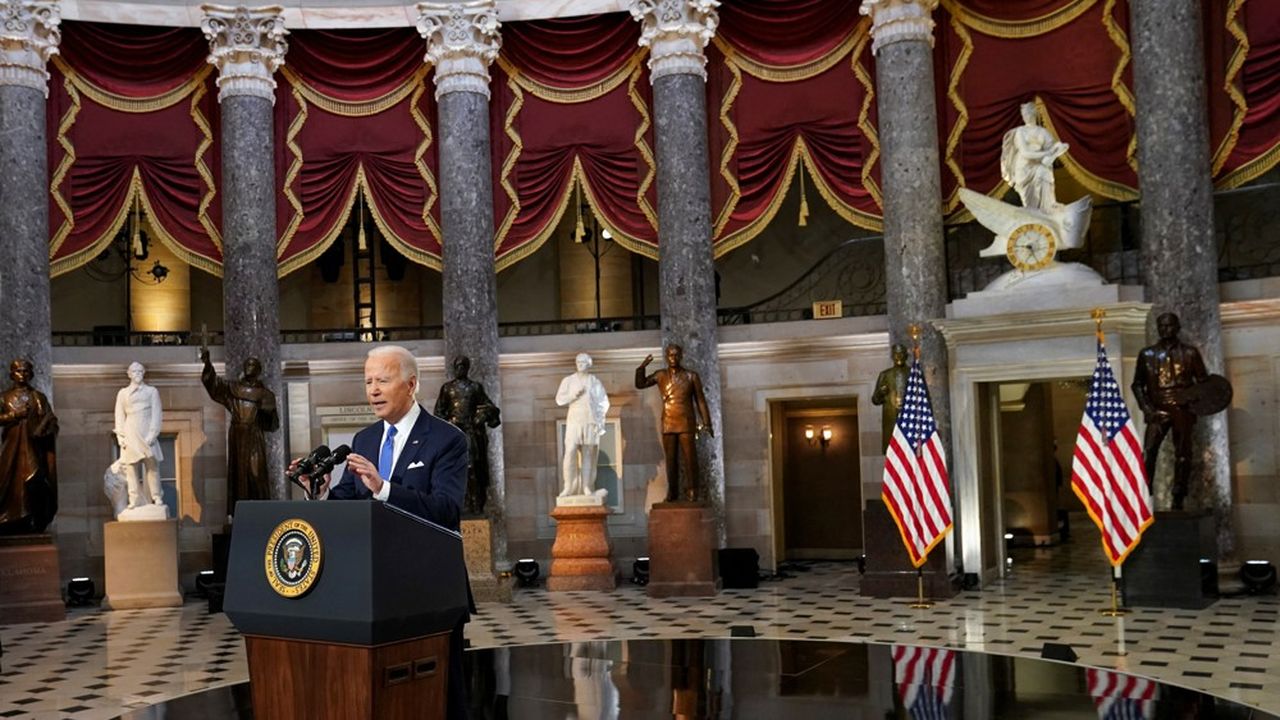 “I will not let anyone put a knife to the throat of democracy.” A year to the day after the assault on Capitol Hill by supporters of Donald Trump, Joe Biden delivered an offensive speech on Thursday to commemorate an event that has stunned the world and continues to undermine American democracy.

In the Hall of Statues of Congress, which celebrates the diversity of American states, the president unleashed his blows for twenty-five minutes against “the former president”. Without ever citing Donald Trump’s name, but in an attempt to awaken the majority of Republicans who still believe that the current tenant of the White House is not the legitimate president of the United States. And in an implicit recognition of his failure to unify the country.

“For the first time in our history, a president not only lost an election, he tried to prevent the peaceful transfer of power as a violent crowd stormed the Capitol,” Biden recalled. Describing the events of an “armed insurrection”, intended to deny the result of an election, the president very directly castigated the behavior of Donald Trump, his “tissue of lies” and of which “the bruised ego counts more for him than our democracy or our constitution ”.

“You can not love your country that when you win, you can not obey the law when it suits you,” he said, recalling that Donald Trump had planted the seeds of suspicion long before the holding of the election in November, ensuring that he could only lose if the ballot was rigged. “When you voted, did you think you were participating in an insurgency? “, Launched Joe Biden to the address of American citizens.

“We are in a battle for the soul of America”, ruled the president, acknowledging that the “promise” of democracy was “threatened”, and not just in the United States. “We are at an inflection point, here and abroad,” he noted, pointing to a “struggle between autocracy and democracy”.

Unsurprisingly, Donald Trump was quick to respond. Under pressure from his relatives, the former president gave up holding a press conference this Thursday from his Florida residence. But he criticized in the speech of his successor a “political theater”, according to him intended to hide the “failures” of his policy.

A line on which the Republican staff had visibly agreed. “It was striking to see certain Democrats in Washington attempt to exploit this anniversary to promote partisan political objectives that existed long before this event”, also ruled in a statement the leader of the Republican majority in the Senate, Mitch McConnell .

Valencia CF: Yunus, the change that has Valencia in suspense: from signing a mega-contract to (almost) not playing

He was dragged by his giant kite, flew several meters through the sky and the video went viral | Chronicle

Martin Rowson on the state of the Conservative party – cartoon