An Argentine participated in the discovery of “Fiona”, the only ichthyosauria fossil with embryos

A scientific team, in which an Argentine paleontologist participated, unearthed “Fiona”, the complete fossil of an adult ichthyosauria with its embryos intact (Azara Foundation)

The Ichthyosaurs were large marine reptiles that looked like fish and dolphins.. They were not dinosaurs, but they lived with them from the Lower Triassic to the Upper Cretaceous (approximately 245 and 90 million years), in what is now America, Europe and Asia.

After 31 intense days of expedition in the area of ​​the Tyndall Glacier in Chilean Patagonia, a scientific team led by paleontologist Judith Pardo Pérez managed to unearthing “Fiona”, the complete fossil of an adult ichthyosaur with its embryos intact. The excavation in the glacier camp was in charge of the Argentinian Jonathan Kaluza, paleontological technician of the Azara Foundation – CONICET and of the paleontologist Hector Ortizfrom the University of Chile (Chile). 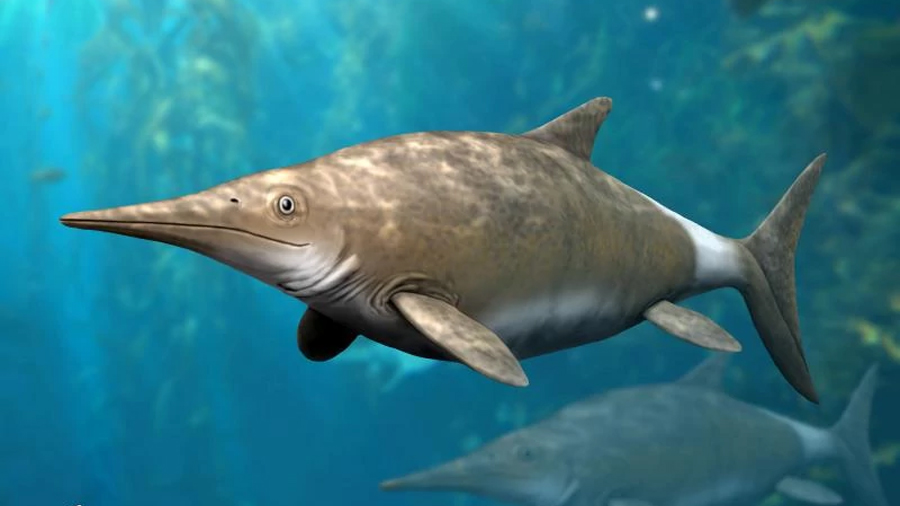 Ichthyosaurs were large marine reptiles that looked like fish and dolphins.

The complex logistics, the difficulties of camping and moving around a rocky site, and the extreme weather conditions made this journey an almost titanic challenge. The paleontological expedition carried out between March and April of this year, who had a pre campaign to the place in October 2021, managed to excavate the only pregnant female between 129 and 139 million years of the early Cretaceous, recorded and extracted on the planet.

“Fiona is four meters long and is complete, articulated and with embryos in gestation. In this sense, its excavation will provide information regarding its species, the paleobiology around embryonic development, and a disease that affected it during its life”, explained paleontologist Judith Pardo Pérez. This finding is added to the discovery of 23 new specimens, Therefore, to date almost a hundred specimens have already been discovered in this Chilean locality, which makes it the most abundant and best preserved deposit of early Cretaceous ichthyosaurs on the planet. 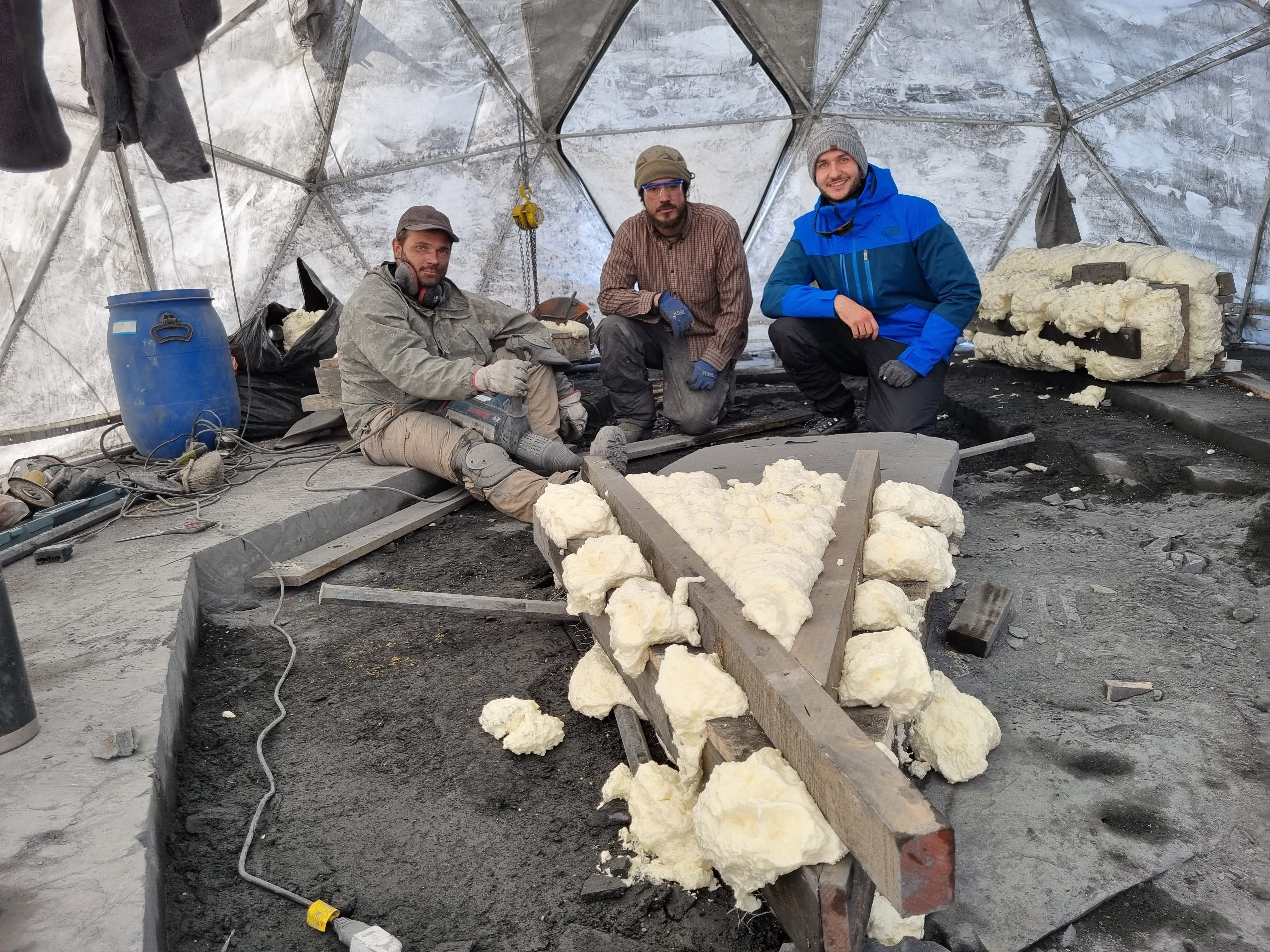 “The results of the expedition met all expectations, and even more than expected. With these fossil records we hope to obtain results on the diversity, disparity and paleobiology of the ichthyosaurs of the Tyndall Glacier locality, establish degrees of bone maturity and ecological niches to evaluate possible dietary transitions that occurred throughout their evolution and that could help establish paleobiogeographic connections with ichthyosaurs from other latitudes”, the expert specified.

Ichthyosaurs were marine reptiles that lived throughout the planet during the Mesozoic era, between 250 to 90 million years ago. They had two anterior and two posterior fins, a caudal fin and a dorsal fin. His body was shaped like a tuna, similar to today’s dolphins. They had lungs, were viviparous and are considered the animals that reached the highest degree of adaptation to the marine environment. “Fiona”, in particular, was discovered by Dr. Pardo in 2009 during the last campaign day of a paleontological expedition to the Tyndall Glacier that was financed, at that time, by the German government. while developing his doctoral thesis at the University of Heidelberg. The recently excavated material will be prepared in the paleontology laboratory of the Río Seco Natural History Museum in Punta Arenas, where it will be temporarily stored for later display. 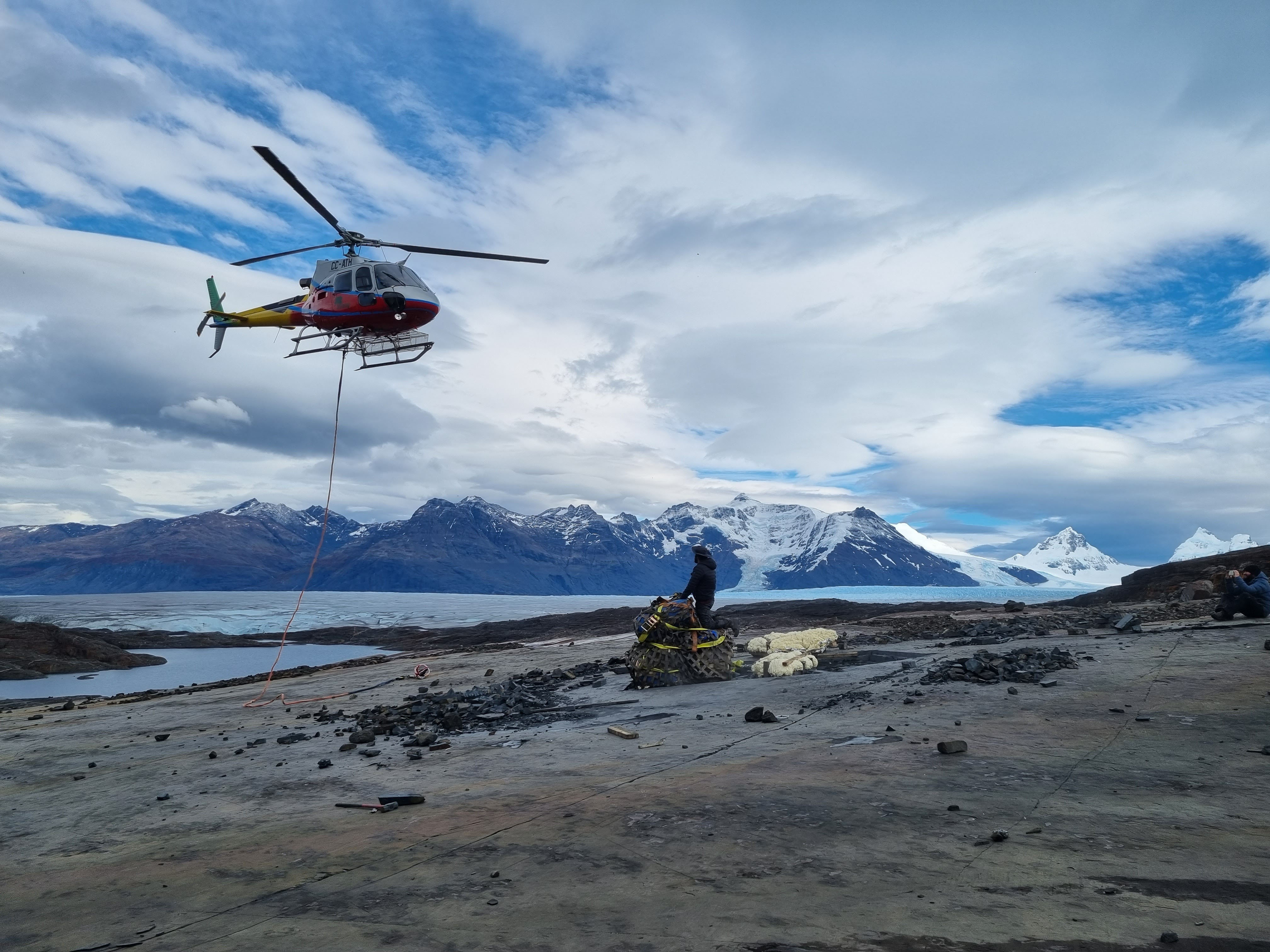 “Fiona”, in particular, was discovered by Dr. Pardo in 2009 during the last campaign day of a paleontological expedition to the Tyndall Glacier (Azara Foundation)

Field work to the extreme

The paleontological study area of ​​the Tyndall Glacier is located 24 kilometers from the last vehicle access. To get to this place, you must hike for 8 to 9 hours from the Gray sector in the Torres del Paine National Park. This means that the field campaigns are long, with a stay of between three weeks and two months in the locality, camping in tents and using horses to be able to transport the camping materials and supplies to occupy during the stay of all the members. of the expedition.

For this specific campaign, investment was made in a hangar to work protected from the wind, rain and snow, and also in machinery and excavation tools for extremely hard ground. Due to the weight of all this cargo and the complicated accessibility -which involves climbing techniques and an hour-long walk through the rocks to the excavation site-, a helicopter service was used to transport the materials and the excavated ichthyosauria. .

In parallel, it was also received the support of the Mayor of the Illustrious Municipality of Torres del Paine, Anahí Cárdenas, who facilitated the use of a boom truck to transfer the materials by land and then to the recovered specimen, to the Río Seco Natural History Museum in Punta Arenas (approximately 400 kilometers).

To get to this place, you must walk for 8 to 9 hours from the Gray sector in the Torres del Paine National Park (Azara Foundation)

But the excavation was the hardest. Héctor Ortiz and the Argentinian Jonatan Kaluza, a paleontological technician from the Azara Foundation, took charge of this task, being the only ones that made a glacier camp during the month of terrain. There, they were able to demonstrate the extreme and complex nature of this operation. “The rock of the outcrop is so hard that it is not possible to excavate with a combo, chisel and brush, having to cut, drill and break blocks with high-caliber diamond tools,” Ortiz said, to which Kaluza added: “This is the hardest dig I’ve had in my entire career.”emphasizing that “this fossiliferous locality in Chilean Patagonia is exceptional, and it is extremely important to continue with the support of the Chilean government to continue investigating and protecting this valuable heritage.”

The magnitude of the objective proposed in the investigation, the complexities associated with the terrain, in addition to the multidisciplinary nature of the study, generated that they will be incorporated into the development of the project, various national and foreign researchers, most of whom were women.

Héctor Ortiz and the Argentinian Jonatan Kaluza, a paleontological technician from the Azara Foundation, took charge of the excavation (Azara Foundation)

The members of the expedition were Dr. Erin Maxwell, head of the department of marine reptiles at the State Museum of Natural History in Stuttgart (Germany), recognized worldwide for her dozens of scientific articles on ichthyosaurs; the Argentine paleontological technician Jonatan Kaluza, expert excavator from the Azara Foundation – CONICET (Argentina; Miguel Cáceres, director of the Río Seco Natural History Museum (Punta Arenas, Chile) and Cristina Gascó, expert preparer and restorer of ichthyosaurs from the History Museum A native of Stuttgart, Héctor Ortíz, biologist and paleontology excavator (Chile) who has participated since the beginning of the paleontological excavations in Cerro Guido (Magallanes) with INACH and the University of Chile; Catalina Astete, intern in the geology career at the Catholic University of Temuco (Chile); Jone Mungia, geographer and campaign logistics manager (Chile); Dr. Dean Lomax, paleontologist at the University of Manchester (England) and world expert on ichthyosaurs; Marcelo Arévalo and Esteban Beltrán as logistical support from Punta Arenas (UMAG, Chile).

For Dr. Pardo, the participation of the experts from the State Museum of Natural History in Stuttgart was and is key. This place is one of the museums with the greatest historical tradition in the study of ichthyosaurs since the 19th century and has one of the largest collections in the world, with specimens of all ages, reaching more than 500 specimens. In this regard, Dr. Maxwell adds that these records can be used to compare with the new findings from Chilean Patagonia, since “we do not have many fossils of marine reptiles from this period of time worldwide (~130- 140 million years), and the ones we have are from Europe”, he assured. Based on this, she highlighted that “the Tyndall locality is very important to fill a gap in our knowledge about the types and general diversity of species that inhabited the ocean in the southern hemisphere, especially in temperate to polar latitudes.”

This project was also joined by Dr. Dean Lomax, from the Department of Environmental and Earth Sciences, of the University of Manchester, England, who valued the scientific milestone as an opportunity to disclose the richness of this fossil site to the planet. “The fact that these incredible ichthyosaurs are so well preserved in an extreme environment, revealed by a retreating glacier, is unlike anywhere else in the world. International collaboration helps to share this exceptional fossil site with the rest of the world and, to a large extent, to promote science”, he stated.

Paleontologists found the first complete ichthyosaur fossil in a Chilean glacier
Guide for lovers of paleontology: which are the points on Earth most populated by dinosaur fossils
Previous Post

This was the wedding of Juan Carlos from Spain and Sofia from Greece, 60 years after the remembered union

Facundo Torres, the Uruguayan midfielder who arrives in Orlando City for US $ 10 million