Alberto Fernández ended his tour of Europe, asked the leaders he visited to unite to stop the war and played his card inside the Government 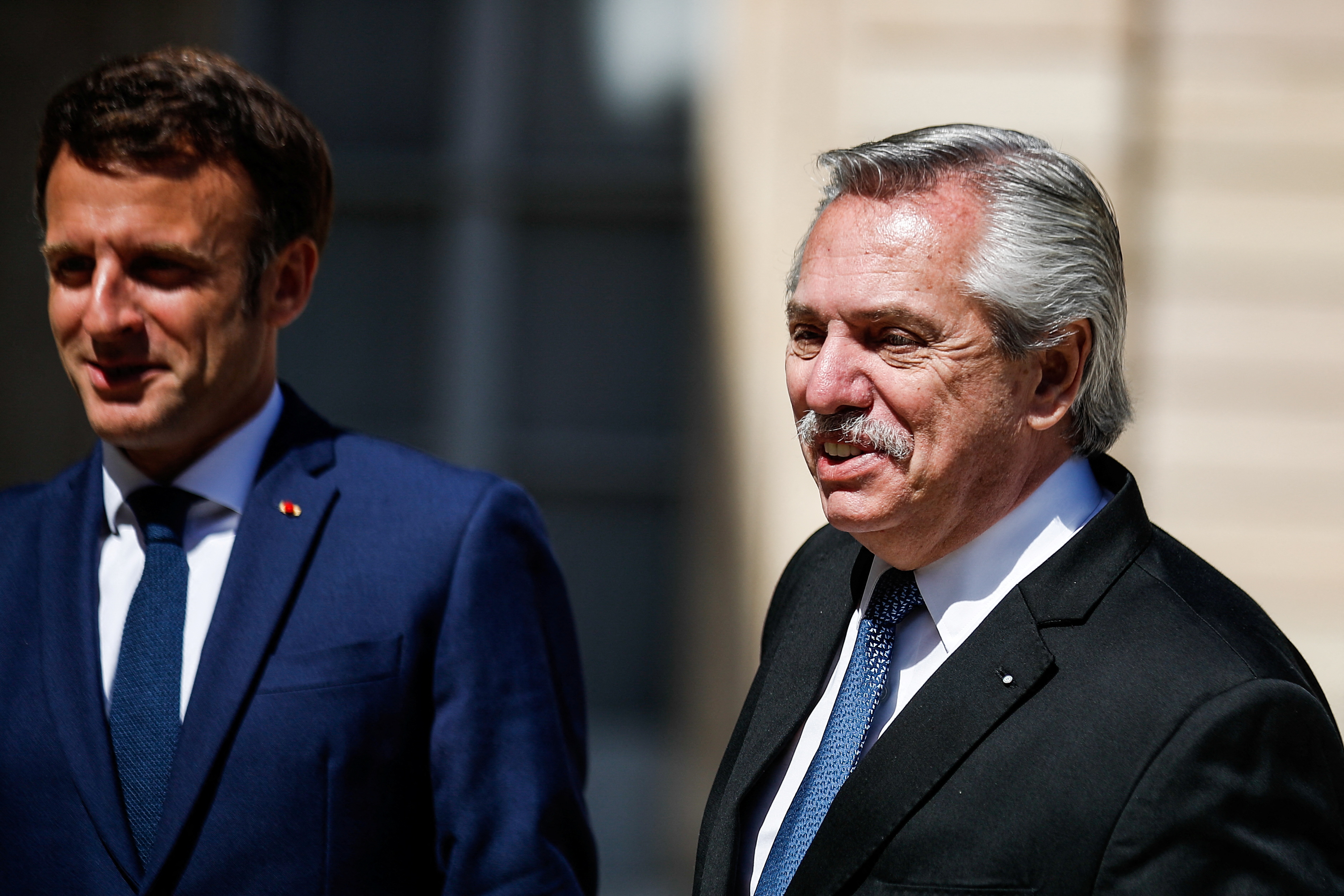 Alberto Fernández with the President of France, Emmanuel Macron. (Mohammed Badra/Pool via REUTERS)

The day that Alberto Fernandez came to Madrid He broke his main precept before getting on the plane: to concentrate only on the central idea of ​​his trip through Europe, which was to bring to three leaders his concern about the impact of the war in Ukraine.

With a handful of statements to a Spanish media, it was enough for him to meddle in the interior that has upset the entire Peronist coalition that makes up his government and that exposes its differences with Cristina Kirchner. He told the Vice President that he had a “partial view” on the management.

Did he do it on purpose? Was it a reflex action in the face of the endless journalistic queries about the future of the Government without the support of the Vice President? It is hard to believe that a political leader with Fernández’s history in power, and the permanent link he has had with the press, can move a chess piece without knowing its direct consequences.

The President responded to his running mate the criticism he made in Chaco a week ago. They bothered him and they were not indifferent to him. Although he assures that she found a positive gesture among so much questioning. Cristina did not speak of the conflictive agreement with the IMF and for him it is a clear sign that this substantive discussion is over. It was closed thanks to her silence. 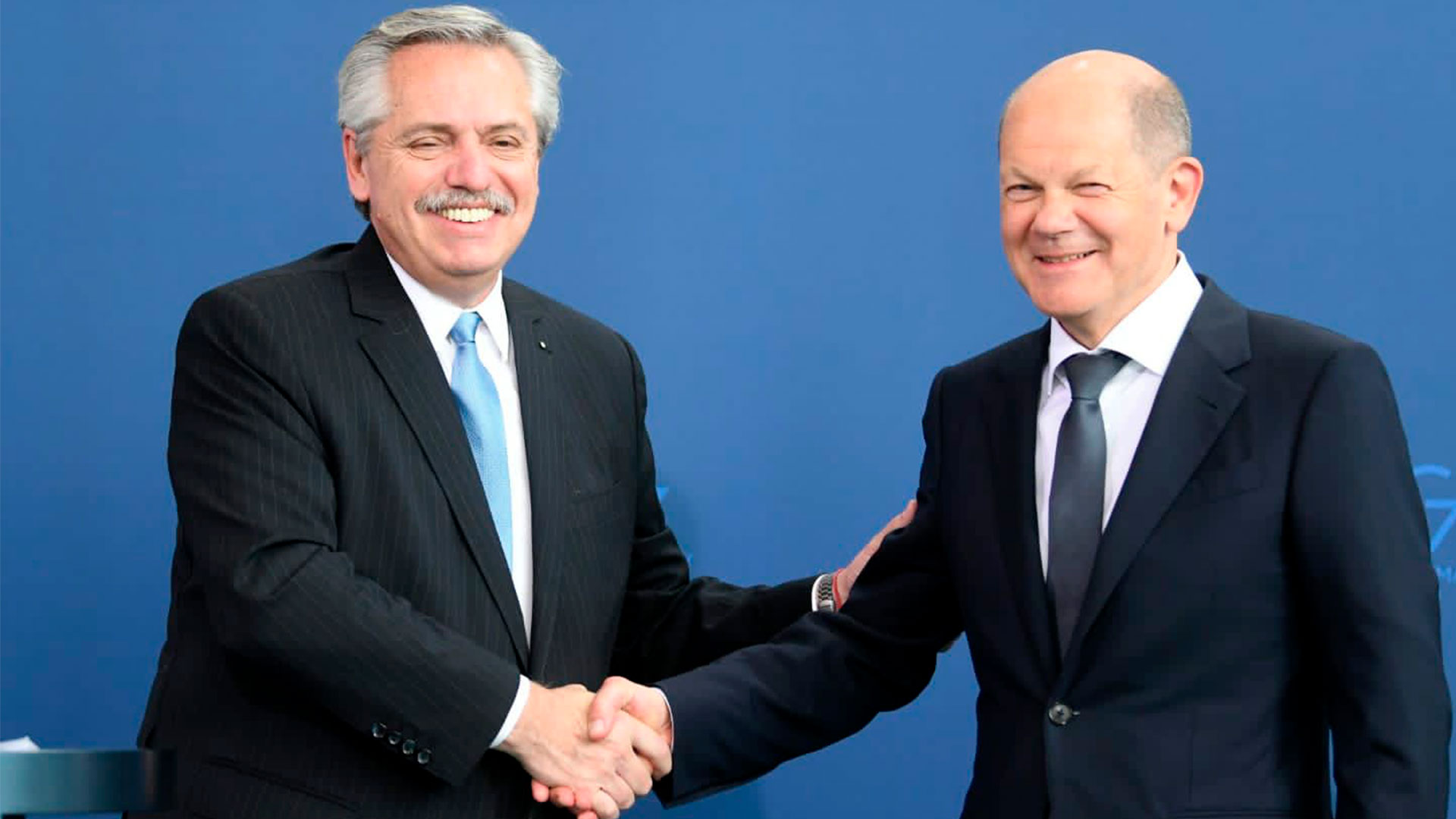 When the Aerolineas Argentinas plane began to travel the road between Argentina and Spain, from the small and select presidential entourage they let it be known that Fernández did not want to get into the ring to fight with Cristina Kirchner. That that was his wish after long weeks of crossfire. But he did the same. She got on and the focus of the tour changed.

Throughout three days of dizzying pace, the President made an effort to put back at the center of his agenda the real reason that made him organize a tour against the clock to see three important European leaders, such as the President of Spain , Pedro Sanchez; the german chancellor Olaf Scholz and the Head of State of France, Emmanuel Macron.

His main concern was to be able to raise the consequences that the countries of the periphery may suffer, like Argentina and many in Latin America, if the Russian outpost in Ukraine continues to condition the global economy. In each of the meetings that she had she made a wake-up call to the European leaders about the need to work together to stop the war.

If the war does not stop, the impact of inflation will deepen, trade restrictions will generate food shortages and rising prices, due to increased demand, will continue to throw the market off balance. They are ruining the world”, Fernandez assumed.

His will to leave behind the internal counterpoints faltered again when close to the President they let it be known that if the Kirchnerist officials who had to sign the rate increase did not do so, they would be fired from the Government. A very clear warning to the K wing of the coalition that does not agree with Martín Guzmán’s plan to segment them. 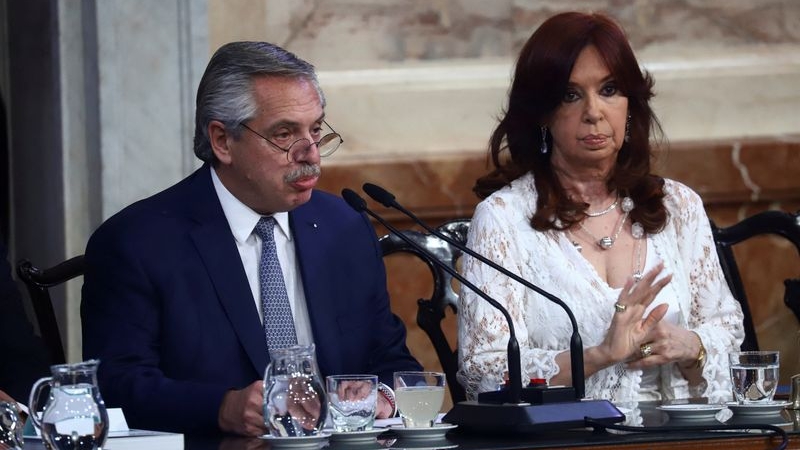 The news exploded in Argentina while Fernández was meeting with the German chancellor. Kirchnerism avoided reacting quickly. It was not for lack of ability to respond immediately, but for a political decision. They did not want to come out to respond with fury. In the circle that surrounds Fernández, they never know how far Cristina Kirchner is willing to raise the bar of confrontation.

The Head of State is convinced, as is his Economy Minister, that it is necessary to “put common sense to the economy”. Implying? An official of his extreme confidence explained it in a sentence that perfectly describes the presidential thought.

“Common sense disappears if you want to carry out a program that uses four points of GDP to support subsidies to pay the rich and if you want to live with 3 or 4 points of fiscal deficit”he indicated, in a description that aligns the Ministry of Economy with the Casa Rosada.

Fernández needs to reduce the levels of monetary issue and reduce the fiscal deficit in order to be able to direct compliance with the agreement with the IMF and, above all, so that the economy, as Guzmán often says, calms down. Or, at least, get on that path without permanent bumps. He wants to do it at his own pace and not at the Fund’s, but he has to do it.

Kirchnerism has another look. He has asked for more issuance and they have indicated that he has room to increase the deficit, in order to increase public spending. Fernández does not believe in that path and is not willing to follow it. That is why he tells his frequent interlocutors that his differences on the economy with Cristina are historical, but that he is the one who makes the decisions. 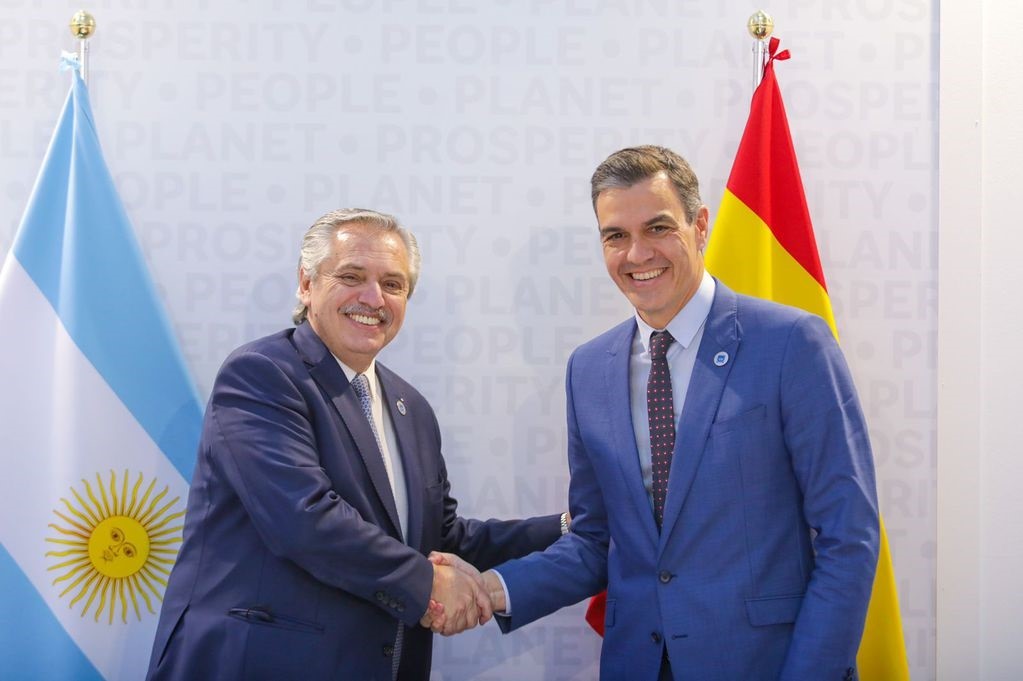 The President’s first stop was in Spain, where he met Pedro Sánchez

What has changed in Fernández after the post PASO crisis is that he became President who is not willing to succumb to pressure from his Vice President, who anointed him to lead the Government, but who has a hard time tolerating that he clings to an economic strategy that she does not share. There begins the dispute of real power marked by differences.

When he arrived in Paris on Thursday morning, he made another attempt to illuminate his travel diary. He had the most important meeting of the tour ahead of him. On Friday he was going to be received by Macron. So, during a press conference, he said: “I don’t want to fight with Cristina”.

He lowered the tone of the inmate that he himself had revived when he assured in the newspaper The country from Spain that the Vice President had a partial view of her management and that she did not consider the damage caused by the pandemic. It did not seem to him a disqualification, but a reality. The mistake, for the purpose of his strategy, was to have registered a new chapter of the intern with his response on the first day of the tour.

The discursive swings shattered a strategy that had begun to bear fruit with the passing of days. Which? Remain silent in the face of K attacks and, when those attacks crossed the limits, as happened the day that “Cuervo” Larroque said “the Government is ours”, let his ministers be the ones to answer so that silence does not become counterproductive.

This was the case until the last day he was in Buenos Aires, when Martín Guzmán, enabled by him, told Cristina Kirchner that the macroeconomic policy of his last government had had inconsistencies. “She says what she thinks and I say what I think. We set positions. That’s what it’s about”Fernandez usually says. 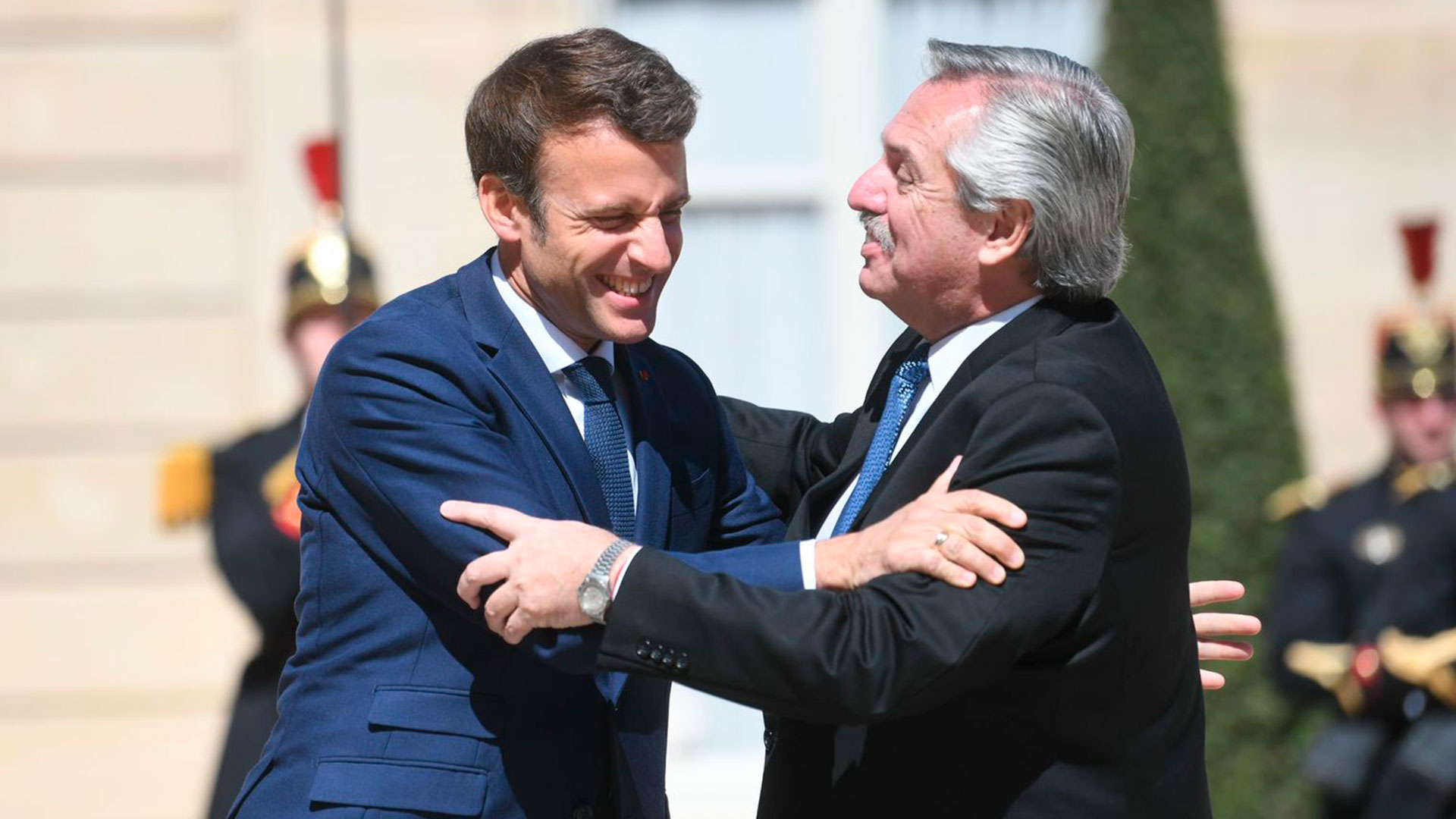 Deep down, this explanation seeks to mark that he, although she does not believe it, has the power that his institutional role gives him and his representation of a sector of Peronism. He is not harmless. He is not a puppet, as the opposition has maliciously tried to install throughout his management.

The rules of the game do not say that she decides and he executes. Especially in this last stretch of his government, where he decided to strengthen himself by advancing in his decisions despite Cristina and Máximo Kirchner’s repeated criticism of his legitimacy, his power and his roadmap to achieve improvements in the economy.

In the speech he gave at the Argentine embassy in France last Thursday, Fernández was honest about the negative result that the publication of the April inflation number would have, a few hours after he spoke. He thus did everything possible to cushion the worst news that any Argentine can receive and that is that his salary pays him less and less.

In his environment they say that he did not know that the INDEC study was going to show 6% in the last month. Still, it didn’t change his perception. “We are not happy with this result”, assured. In the Government they hope that the inflationary decrease will be slow, but it continues. That is, that next month break the last barrier. It will always be on a high floor, but with a way down.

Stripped of the internal shrapnel, Fernández found himself on Friday with an unexpected compliment from Macron, who assured that the Argentine president was an “important actor in this stormy international scenario”, which remained standing after Vladimir Putin’s decision to invade Ukraine. 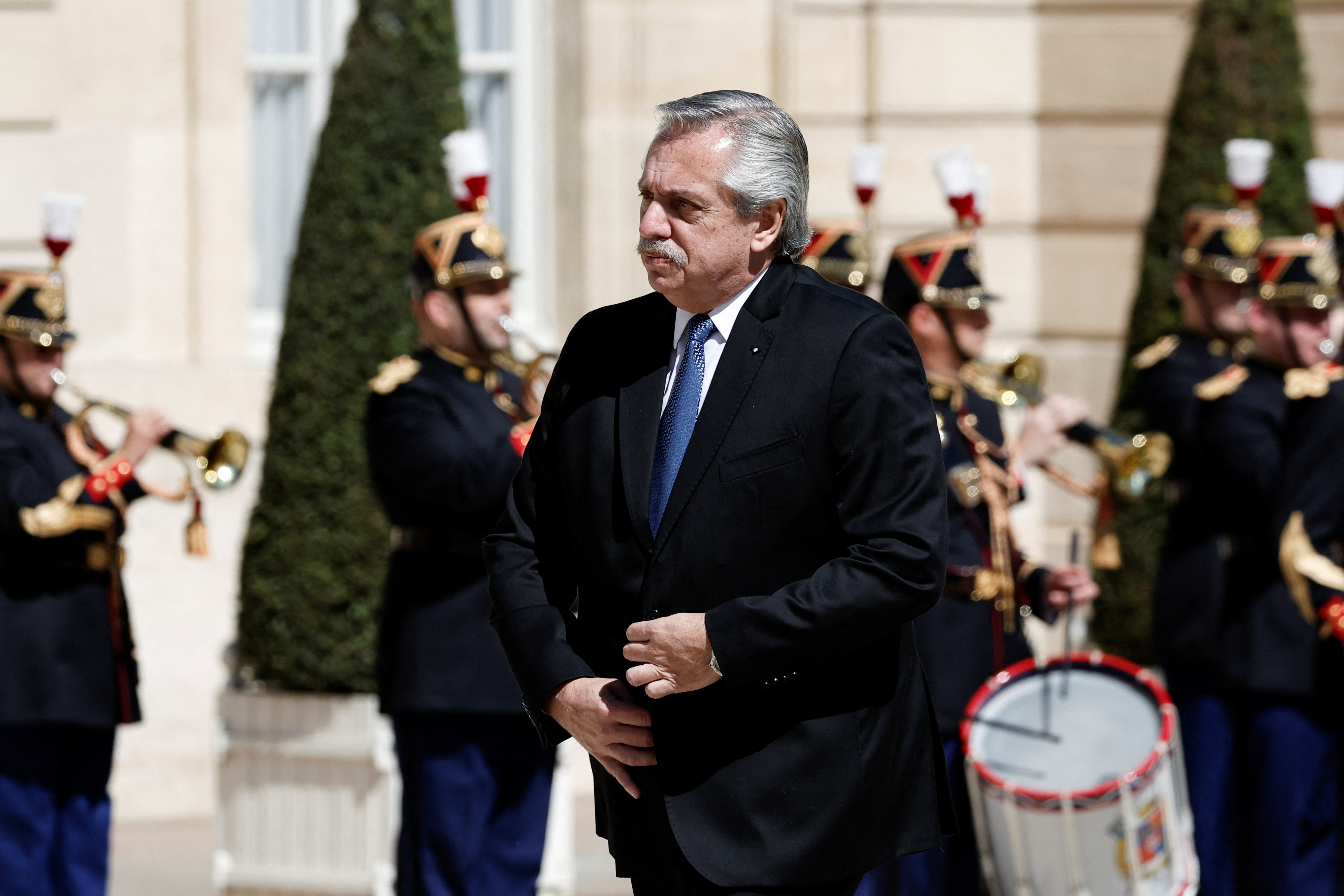 In addition to highlighting his concern, and that of Latin America, in his role as president of CELAC, about the impact of the war on the economy of that sector of the world, and meeting with the main European leaders to hear what scenario they see in front of to the continuation of the armed conflict, Alberto Fernández traveled to Europe to bring a message of peace and ask for the end of the Russian attack.

That should have been the predominant theme of the tour. That’s how it was stipulated. But it was he himself who modified that projection. He was able to leave it well marked in the final minute. “We need more food and fewer missiles”was the phrase that closed her trip through the Peronist intern.

There is no longer any doubt about Argentina’s condemnation of Russia for the tragedy in Ukraine. Nor of the will of Alberto Fernández to try to play a preponderant role in the negotiations that may open to reach the end of the war.

From his place, from his modest role in the global agenda, he wants to make himself heard as a moderate vision. Convincing that economic sanctions against Russia are not the best way forward and persuading European leaders of the need to lower the bellicose tone and stop the escalation of violence in Ukraine.

The tour had a positive balance for Fernández, despite the enormous wear and tear that the intern continues to generate. He left the message of it, it was accepted and well received by the presidents and the chancellor. When he arrived in Buenos Aires he found that Máximo Kirchner had criticized him again without naming him and Martín Guzmán with his first and last name. Everything returned to normal.

Máximo Kirchner redoubled the criticism against Alberto Fernández: “When you want to drive, you must know how to obey”
A governor close to Alberto Fernández supports the Single Ticket and could be the key to the opposition in the Senate
Previous Post

What are the only two drinks (besides water) that Harvard considers healthy?

In the midst of the scandal of Culture of the Nation, an ultra K Mendoza official resigned

Unusual sighting of a blanket octopus in the Great Barrier Reef

Granada CF: Vctor Daz: “We have to be calm and not go crazy”

Athletic: Raúl García: “There is no other option than to start LaLiga without Marcelino”

Elche: Bigas: “Maintaining the base would be essential, but perhaps it is difficult”

Fan Tokens: Eto’o awaits you at the Camp Nou to play the match of your life